Translate this page into:

©2019
Licence
This is an open-access article distributed under the terms of the Creative Commons Attribution-Non Commercial-Share Alike 4.0 License, which allows others to remix, tweak, and build upon the work non-commercially, as long as the author is credited and the new creations are licensed under the identical terms.

Dental anxiety remains a barrier to dental care for a considerable proportion of the population. The psychological profile of patients dentally anxious but not highly anxious is quite similar to normal (non-anxious) patients’ profile.

A cross-sectional study was conducted among 130 arts students out of which 86 were males and 44 were females. Modified dental anxiety scale was used to measure dental anxiety using a five-point Likert scale. Personality trait was assessed using the short-form revised Eysenck personality questionnaire scale which consisted of 48 questions. Statistical analysis was done using independent t-test with statistical significance at 5%.

Anxiety is defined as “a state of apprehension resulting from the anticipation of a threatening event or situation.”[2] Dental anxiety is historically deeply rooted in people. Many individuals experience anxiety at the thought of visiting a dentist for routine checkup. In fact, epidemiological surveys indicate that approximately 50–70% of individuals experience feelings of apprehension before and during visits to the dentist.[3]

Dental anxiety has been ranked fifth among commonly feared situations. Given its high prevalence, it is not unexpected that patients with dental anxiety avoid dental visits. Only a minority of patients claim to have no anxiety in the dental environment.[4]

Although such fear and anxiety is no doubt multifactorially determined, an important set of determinants consist of psychologically based factors such as personality traits, satisfaction with life and thought suppression, fear of pain, past traumatic dental experiences particularly in childhood (conditioning experiences), the influence of dentally anxious family members or peers which elicit fear in a person (vicarious learning), and blood-injury fears.[4,5]

Personality is the characteristic behavior-response pattern that each person develops, both consciously and unconsciously, as his or her style of life. Neuroticism is the only trait that exhibits a significant correlation with dental anxiety. Neuroticism is a relatively stable, enduring aspect of the personality. Individuals who score high on this trait tend to experience more negative effect, such as anxiety, fear, sadness, embarrassment, and guilt.[1] Investigations of the association between personality and dental anxiety have yielded inconclusive results.

A cross-sectional survey was conducted in Al Azhar College of Arts and Science (during September 2018) among 130 students who were chosen randomly to find an association between dental anxiety and personality. The sample size of 130 included 86 males and 44 females. Sample size was calculated based on the formula n=P(1−P)/D2 where P = Expected proportion; ethical approval was obtained from the institutional review board. A validated questionnaire was adapted from the survey used by Sourabha and Puranik[6] in a previous study with some modification. Data collection was done by distributing questionnaires among the students during the lecture hours with prior permission. The questionnaire included 50 closed questions which were divided into five sections. The first one was a “modified dental anxiety questionnaire,” included five questions with five options each, which were given scores ranging from 5 to 1 (the options were not anxious, slightly anxious, fairly anxious, very anxious, and extremely anxious). The other sections were “extraversion” (12 questions), “neuroticism” (12 questions), “lie scale” (10 questions), “psychoticism” (11 questions) with 2 options, yes/no, which were given score 2 and 1, respectively. The questions were incorporated after going through various literature related to that. The questionnaire prepared was then accessed by carrying out a pilot study among the experienced psychologists, and the necessary corrections were made accordingly. Reliability of the questionnaire was found to be good (k = 0.83). The answers were received on the same day of survey and analysed. Prior written consent was obtained from all the participants and also from the school authorities to conduct the study. Two investigators were present on the data collection room for 1 h (max time allotted to answer the questionnaire) to avoid participants discussion and also to provide any clarifications on the questionnaire. Remaining authors were contributed to the designing and analysis part of the study. After one hour, the questionnaires were collected. Incomplete responses were excluded from the study and given neutral value. The professional qualifications of the participants were considered. Statistical analysis was performed using the statistical package for the social science (SPSS) software 20.0; significant level was kept at 5%.

It was self-administered questionnaires’ consisting of two parts:

The EPQ-R scale consists of 48 questions, 12 questions for each personality traits. 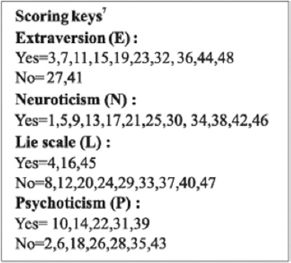 1.How anxious would you feel if “you visit your dentist for treatment tomorrow”?

2.How anxious would you feel if “if you were sitting in the waiting room”?

3.How anxious would you feel if “about to have a tooth drilled”?

4.How anxious would you feel if “about to have your teeth scaled and polished”?

5.How anxious would you feel if “about to have a local anesthetic injection”?

Personality with neuroticism exhibited higher anxiety compared to other type of personalities [Table 4].

Dental anxiety is a recognized problem for both patients and dental health providers. Dental anxiety refers to patients’ specific response toward dental situation-associated stress.[7] It is a major issue concerning appropriate dental care which leads to irregular visits, delay in seeking treatment, or its avoidance altogether. It has been shown that dentally anxious individuals are more dissatisfied with dental treatment modalities than their non-anxious counterparts. Modified dental anxiety scale (MDAS) is utilized in the present study as it is the most commonly used tool to measure dental anxiety. On the other hand, personality traits are closely related to dental fear and its course. Neuroticism and lower extraversion have been shown to be associated with extreme dental fear and a chronic course of fear, i.e., a tendency to maintain fear over time. In contrast, higher extraversion is more likely to predict remission of fear.[5] Personality traits and the level of fear are linked to each other; the psychological profile of patients dentally anxious but not highly anxious is quite similar to normal (non-anxious) patients’ profile.[7] In the present study, revised EPQ is used as this scale can be used in individuals >18 years of age and it requires only 10–15 min to fill the questionnaire. Dental anxiety is gender related. In the present study, dental anxiety is seen more in females (11.34%) when compared to males (9.69%). This is similar to various studies conducted.[7,8] This is in contrast to a study which showed males (10.9%) had higher anxiety compared to females (9.6%).[6] There was no correlation found between dental anxiety and personality traits. This may be due to the tool selected which might not be sensitive enough to measure personality traits and dental anxiety. One study has shown negative correlation with dental anxiety among extroverts and positive correlation with neuroticism.[7] In another study,[9] it was conducted among university students who were shown similar result in which female students were found to have higher level of anxiety in all groups. This finding must be explained on the basis that the women have higher level of neuroticism than men and the anxiety is positively associated with neuroticism. Avoidance of dental care could be attributed to dental fear and anxiety in many patients. Dental anxiety might also affect patient–dentist relationship. Lack of dental health education might result in patient’s fear and anxiety which in turn might end with poor patient compliance; this will make it more difficult to manipulate patient’s and increase dental professional-related stress. Assessing level of anxiety before commencing dental treatment may offer invaluable insight into the patient attitude; behavior toward dental treatment which might be utilized in developing the best strategies to manage patient anxiety.[10]

Limitations in the present study could be selection of participants who gave consent on the day of visit. Second, previous dental experience was not considered which could have an influence on dental anxiety.

Hence future studies should be conducted among general population with better tools to determine whether there is an association between dental anxiety and personality trait which can be considered during the treatment of dentally anxious patients in a clinical setting. Previous dental experience should be considered as one of the predisposing factors for dental anxiety.

The present study reported females having higher dental anxiety and difference was statistically significant (P<0.05). A total of 30 (23.07%) were classified as Extraversion, 24 (18.46%) as Neuroticism, 32 (24.61%) as Lie scale and 20 (15.38%) as Psychoticism according to the scale used. In the present study there was no association between dental anxiety and personality trait.

There are no conflicts of interest.