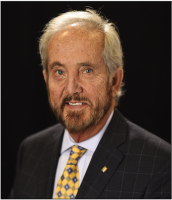 Exotic and intriguing Africa was the destination. I had heard about Uganda, though I wasn’t certain where it was. I had even had my excitement perked when, as a dental student forty some years ago, we had been assigned to Nigeria, then Ethiopia, then Kenya, never to get there. Rather, I was diverted to Bella Vista Hospital’s mission dental clinic, when, even with Canadian Boards, a work permit (Kenya dental license) could not be arranged without a year of private practice. Being asked by Koren Borland, DDS, FADI (Vice Regent, SW US, USA Section, Academy of Dentistry International) a few months ago, I didn’t have to think twice about this.

After much preparation (visas, donations from companies at ADA in Las Vegas, instruments, materials, equipment, etc.), a group of six (about half the team) departed LAX on Thursday, November 17, destination Entebbe International Airport, outside the capital of Uganda, Kampala.

The mission trip was sponsored by NEEPUganda (www. neepuganda.org), with the goal of correcting the oral disease of students at a Christian school way out in the country.

Uganda is a smaller country with 91,000 square miles and 32 million people, in East Africa. It is on the equator and bordered by Sudan to the north, Kenya to the east, Rwanda and Tanzania to the south, and Democratic Republic of Congo to the west. The monetary unit is the Ugandan Shilling (USh) which yields 2500 per dollar (USD); a common wage is $50,000 USh/month ($20 USD). Electricity has more demand than supply, so the power is rotated around the country causing unannounced, very inconvenient blackouts from time to time, several per week. In some areas, it is off more than on, so cold showers are the norm: I recall the temporary headache I got as I gingerly stuck my head under the cold shower water in my attempt to shampoo my hair. It surely saves water, though! Taxis are riding behind a motor scooter driver, and costs $1,000 USh (about 40 cents USD) to go from place to place shorter distances. Time zone is GMT +3, or 11 h ahead of California.

English is the official language, though there are 33 indigenous local languages impossible to understand. Luganda is the most popular and to the untrained ear, sounds like chatter. Strange letter combinations exist, such as Mz, Ny, and Mw. The former British rule left its mark in word usage, such as: trash = rubbish, yield = give way, and turning off lights = extinguish lights. HIV infection has reduced, but still high at 6%, except for the Boda-boda (motorbike taxi) drivers, at 9%. During November there are a couple of weeks of “grasshopper season,” when they are caught for roasting and eating: AT night, bright flood lights can be seen with the attracted swarms being funneled into collection with corrugated tin roof sheets. Before you ask, yes, I did try them, but only a few times! The climate is fairly constantly tropical, with latitudes from 4dN to 1dS: A small monument designates when the equator is crossed.

Green is an understatement for the terrain of Uganda, with verdant, fertile land. Almost 25% of the country’s surface area is covered by water, including Lake Victoria (owned by Uganda, Kenya, and Tanzania), Africa’s largest lake, and the world’s second largest fresh water body. From this lake as its source, the Nile River flows northward through central and northern Uganda, Sudan, and Egypt, on its long 4130 mile (6650 KM), 3-month journey to the Mediterranean Sea. Gandhi’s ashes were scattered in this river near its source at Jinja. We were able to travel the river onto the lake, as well as see a variety of elephants, hippopotamus, leopard, bison, and a myriad of bird species in our safari through Queen Elizabeth National Park, Uganda’s second largest of ten Parks, along with its several other wildlife reserves and forest reserves.

About 85% of Ugandans are Christian, divided equally between Protestant and Roman Catholic, and 11% are Islamic, though that number is growing. Kampala (the Capital) near Lake Victoria, is the largest city of 2 million, and Jinja near the Source of the Nile River, is second. About 85% of the people live rurally, where the majority are born in a village, grow up in a village, work in that village, and die in the village, never knowing much else of Uganda nor the world.

No report on Uganda would be complete without mention of Amin. Uganda gained independence from Great Britain in 1962 and Milton Obote became the first President of Uganda, for 9 years until 1971. Idi Amin, poorly educated and barely literate, took power while Obote was away in Singapore. By 1974, Amin was fully engaged in his reign of terror. During the 8 years he was in power, 300,000 Ugandans were killed, many of them tortured to death in horrible ways. He was driven into exile in 1979, and died from multiple organ failure in a Saudi Arabian hospital in 2003.

As it turned out for Uganda, 30 years after Amin was booted into exile, and over two decades of President Museveni, the country bears few obvious scars of what came before. You see, Ugandan optimism says the dark days are in the past, as it embarked on one of the most staggering economic and political transformations of our time, to become, in the words of a recent Oxfan report, “an inspirational economic success story, and a symbol of a more vibrant, successful Africa.” This is the resilience of the East African people in Uganda. Today, Uganda enjoys one of the healthiest reputations of any African country when it comes to crime directed at tourists.

In preparing for this adventure, friends and relatives asked me if I was hesitant or afraid, if I were sure I really wanted to go to Uganda. I confirmed I was steadfast in going to help, I was not hesitant nor afraid, and as it turned out, people are more friendly than expected. No violence nor even hint of danger was evident, just lots of smiles for us on Ugandan faces.

During our time in Uganda, that is what we observed, friendly, smiling people who enjoyed conversing and wanted a picture taken. Our assignment was to work on nearly 400 students, primary and secondary, at Nyamabuga village (translation = place of springs of healing water), operated by Sister Gertrude Kabatalemwa. We were to screen everyone, treat first those with infection or pain, complete the restorative challenge, then educate all in oral hygiene to eliminate gingivitis and provide for oral health. With the oral/systemic connection so obvious nowadays, this would give them improved general health. As it turned out, mission was accomplished in a week. Our teacher in the group, Linda McQuarrie, MA, was superb at instructing and entertaining as she demonstrated disclosing solution, brushing technique, and distributed brushes to everyone. In my opinion and from a public health standpoint, this likely was the most important part of our impact there. Perhaps even, we motivated some to get out of the cycle of village living in poverty, to pursue education, and strive to be more and break the cycle.

On the last day, before we packed up to leave, the entire school thanked us with a Farewell Celebration. Music, costumes, dance, and poetry were all directed at gratitude for our visit and our help. My takeaway from the Uganga experience is what we were told upon arrival, as well as every day we were there: “You are most welcome.” I just wish you could hear it with that beautiful accent, which is the memory I take home.

In all my travels to various countries of the world, I have noted something interesting to me. Whether in India, China, Latin America, or atolls in Micronesia, all of us are alike in many ways. I am impressed that all human beings, whatever the culture, wish for the very same things in life: To find meaning, to be loved and appreciated, to touch, and be touched. Indeed, we are more alike than most of us realize, though circumstances for each can vary widely.

My hat goes off to the hard working group of NEEPUganda and Koren Borland, DDS, and FADI, who organized and led the dental team. These are outer directed people who give and give, and then give a little more. Are you outer directed, finding ways to help others, being helpful in ways that bring joy and happiness to others? Or are we inner directed only with concerns about our own wants and comfort, an egocentrism of sorts? In the words of my dental and public health classmate, David C. Brodeur, “I have concluded that we are on this earth to help each other.” Thanks, Dave, well stated. In the words of one of my medical heroes: “I don’t know what your destiny will be, but one thing I do know, the only ones among you who will be happy are those who have sought and found how to serve.” Albert Schweitzer, MD, PhD. And in the words of Duane Hulse: “We make a living by what we get, we make a life by what we give.” May we be able to give more when the need appears.